Please enable JavaScript in your browser.

What is Keeping Records and the Golden Gate?

Keeping Records and the Golden Gate: U.S. Immigration Control and Pacific Migrations is a digital public history project comprised of a digital collection and exhibitions pertaining to the history of immigration restriction in the late nineteenth and twentieth centuries. All the objects in the collection come from the National Archives and Records Administration (NARA) and make up files known as “Alien Files” (A-Files), which are the collected documents relating to an immigrant’s interactions with the United States’ immigration system. The exhibitions draw on these objects to expose the mechanisms of migration control used to restrict and exclude migrants entering U.S. territory through Pacific ports. Keeping Records and the Golden Gate reveals the onerous nature of immigration restriction and exclusion, analyzes the nature of the American imperial project in the Pacific, and exposes how archives of unassuming documents are not neutral spaces, but sites of power.

This project began as a practicum component of a course titled Asylum in Crisis, taught at New York University in Spring of 2021 by Professors Ellen Noonan, Sibylle Fischer, and Benjamin Schmidt along with graduate instructors Bárbara Pérez-Curiel, Alexia Orengo-Green, and Bryan Zehngut-Willits. The team of instructors received a Bennet-Polonsky Humanities Lab (H-Lab) grant from the Center for Humanities at New York University. The H-Lab is a unique model that funds a semester of humanities research with outside experts, faculty, and graduate students. This H-Lab centered on the United States immigration system, especially as it pertains to asylum seekers. After the semester of research, participants teach an undergraduate course that integrates the research directly into the curriculum.

In a weekly plenary session, all six instructors joined our students for an interdisciplinary dive into the depths of the U.S. immigration and asylum system. While the faculty typically planned and led the plenary sessions, we also had weekly colloquia in which half the students joined Pérez-Curiel to study immigration narratives, especially as it appeared in journalistic accounts. The other half joined a session planned and taught by fellow graduate instructor Alexia Orengo-Green and Zehngut-Willits, which examined the history of U.S. immigration policy over the course of the nineteenth and twentieth centuries. The colloquia also aimed to provide students with practical skills, and in the case of the history colloquia, we intended to provide students with experience and know-how for building a digital public history project. That project has evolved from its final state at the end of the class into Keeping the Records and the Golden Gate. The instructors and students have since published their reflections and final class projects in Esferas, the undergraduate student journal of the Spanish and Portuguese department at NYU.

Wax helps you create digital exhibits.
A digital exhibit is a collection of curated cultural artifacts—manuscripts, paintings, photographs, sculptures, etc—often accompanied by an explicit narrative or argument. Though Wax focuses on images and text, it could be used for sound or video collections with some customization.

Wax is an extensible workflow based on minimal computing principles.
Wax is hyper-aware of differences in resources, control and access around the world and close to home. As a result, it is purposefully lightweight: a few Ruby gems, some customizable UI components, good documentation and (hopefully soon!) recipes for creating, deploying, and maintaining custom digital exhibitions.

The exhibition sites created by Wax are static.
This means they consist of flat HTML, CSS, and JavaScript files that don’t need to communicate in a complex way back to a server. This makes them cheaper, safer, and generally easier to maintain.

The skills needed to create Wax sites are agnostic.
This means they are largely transferable for use in other digital projects. ‘Learning Wax’ does not mean learning how to use a platform. It involves learning the fundamentals of web development, data management, and plain text editing while leveraging a few great open source libraries and frameworks along the way.

Wax keeps the collection presentation separate from the collection data.
The Wax workflow starts with making standardized image files and metadata records and builds around them, handling canonical information, scholarly content, and site styling differently and deliberately. This makes it easier for you or others to share, reuse and reimagine your collection data in other contexts.

Who is Wax for?

Wax was created for individuals and groups who either don’t have or don’t want to use a lot of resources to create their scholarly or cultural exhibits. It’s best suited for folks who are willing to take on some technical responsibility in exchange for a lot of flexibility.

For beginners, Wax has a relatively high, but general-purpose learning curve. To get the most out of Wax, you should have some familiarity with:

However, Wax is also great for teaching or learning the skills above! For examples of digital pedagogy via the creation of Wax exhibitions, check out this workshop, this GitHub repository, and this custom Wax site.

Wax is also phenomenal for professionals who play a facilitating role, such as Digital Scholarship Librarians or Coordinators. With some practice, Wax substantially reduces the time to production and post-production maintenance costs for you and your team. In the most common scenario, students, faculty, colleagues or any other collaborators just have to provide you with a properly formatted spreadsheet and the text for the exhibits. The extras are up to you.

Below is a diagram to give you a zoomed-out view. In summary, you create a file of metadata records for your collection (in CSV, YAML, or JSON format), organize your collection image files, and put both in the Jekyll site folder. After updating your configuration, you run a few command line tasks to prepare the data and metadata for use by the Jekyll site. Jekyll then uses special layouts and Wax components to build the exhibit and spits them out as static pages ready to publish.

From there, you can run tests on your site to catch errors and decide where and how to put it online or in offline media. 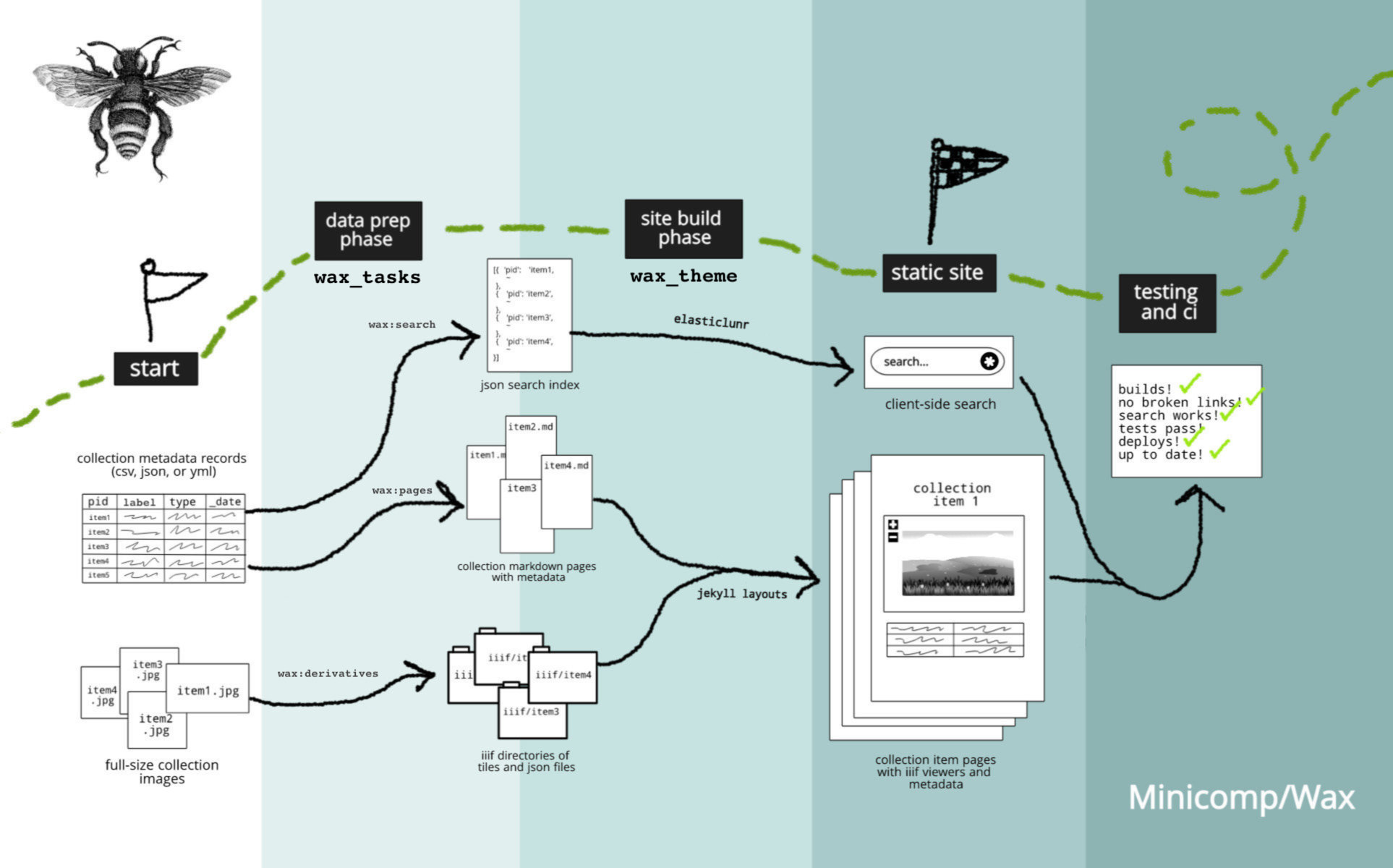